What to do in Anacapri, Southern Italy’s Paradise Village

Among the many treasures the south of Italy offers us, wanderers, there is a place blessed with such beauty, that it is said it will change you forever should you find your way upon its glorious cliffs.

A dwelling of light and beauty, Anacapri sits on the higher part of Capri Island, offering astonishing views of the Gulf of Naples. An ageless place, authentic and serene, the village greets its visitors with magnificent hiking trails, divine traditional food, rich history, splendid art, and elevating culture.

Come, Dear Traveler, let us explore some of its secrets, and take our fill of light and joy and quiet grace. 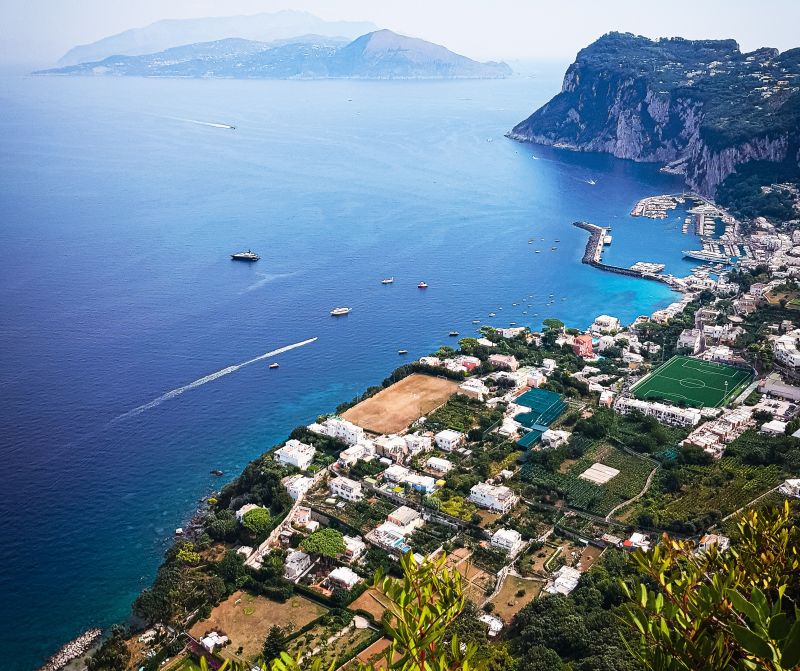 There is such an incredible display of natural power and majesty in this wonderful place, that it almost makes it feel other-worldly! Thus, there is no wonder that legend claims the mesmerizing cliffs and grottoes of Capri Island were once inhabited by sirens, singing their bewitching songs to each passing vessel, luring it to crash on its mighty rocks.

It is said that near this very island the wise Ulysses escaped this tragic fate, by waxing his companion’s ears and tying himself to the mast.

For a fairly small isle, Capri has an exceptionally rich history with archeological discoveries dating back to the Paleolithic Era. The first prehistoric artifacts were discovered by Roman Emperor Caesar Augustus who displayed them in a private museum on the island.

Around the 8th century B.C., the island belonged to the Greeks, who left us the 921 so-called “Phoenician Steps“, still connecting Anacapri to Marina Grande. Until 1874, when a carriageway was built between the village and Capri Town, these steps were the only path to reach Anacapri.

The Roman Emperor Caesar Augustus was bewitched by Capri Island and acquired it from the city of Naples sometime in 29 BC. He built his private resort here, with beautiful villas and impressive gardens.

His successor, Tiberius, spent his last ten years on the beautiful island, building twelve villas between 27 and 37 AD. He also discovered the famous Blue Grotto and commissioned beautiful statues to adorn the amazing sea cave.

Troubled times followed the Roman era, with the small island having to withstand Muslim attacks, pirate raids, the plague, and many, many conquerors.

During the 19th century, Capri was rediscovered as an immensely beautiful and serene island, that can raise the spirit and inspire the best in people. Since that time it became a favored destination for writers and artists of all kinds.

Among the most famous are the Swedish doctor and writer Axel Munthe and the renowned French composer Claude Debussy.

Memorable Things to do in Anacapri

As you wander the streets of the charming village, filling your heart with the beauty and joy all around, you will find yourself drawn to Axel Munthes‘ magnificent home.

A magical and inspiring place, raised by an incredible person, Villa San Michelle, welcomes its guests with breathtaking views of the Gulf of Naples and fascinating stories, among stunning ancient art.

The estate, now a museum open to the public, was built by the Swedish doctor and writer at the end of the 19th century. The magnificent construction rises 327 meters above sea level, on the north-eastern side of Anacapri, on the place where one of Emperor Tiberius’ villas once stood.

Personal doctor of Queen Victoria of Sweeden, writer, philosopher, and animal rights activist, Axel Munthe led an inspiring life. He fell in love with Anacapri when he was 19 years old and, following his lifelong dream, raised the Villa San Michelle here, building most of it himself, with help from local craftsmen.

Axel Munthe decorated his home with magnificent ancient artifacts, some uncovered in the construction of the Villa, or by farmers plowing nearby fields, remnants from the time of the Roman Emperors. The guests visiting his Villa today can admire ancient Roman statues, frescoes and mosaics, Etruscan artifacts, and even an ancient Egyptian Sphinx.

During the summer months, the guests are invited to attend uplifting music festivals and cultural events in the gardens surrounding the Villa.

Axel Munthe’s captivating memoirs, “The Story of San Michelle”, are a fantastic way to discover the spirit of this extraordinary place.

Adventure and unimaginable beauty await the wanderer near the lovely village of Anacapri, at the island’s most famous attraction, the Blue Grotto.

As you reverently enter the almost sacred space of the famous sea cave, your heart fills with awe at its lovely grace and mystical azure blue light. The unusual light effects, that have attracted so many people since its discovery, occur due to sunlight intruding the cavern from a wider opening below the water surface.

During Emperor Tiberius’s stay on the island, the beautiful cave was used as a marine temple, dedicated to Neptune and his Sea Nymphs. And today it still gives its visitors the impression they have entered a holy place, a sanctuary.

Some of the statues that used to decorate the Roman Marine Temple were discovered in 1964 by divers and can be seen at the Museum and Historical Residence Casa Rossa in Anacapri.

The mouth of the cave can only be entered by little wooden boats, with passengers laying down, while the captain guides the vessel through the roughly one-meter-high opening using a metal chain attached to the cave walls.

Once inside, your hoast will most likely enchant you with charming traditional Neapolitan songs.

The Blue Grotto can be reached by foot from the center of Anacapri, via a lovely 40 minutes hike. Follow first Via Pagliaro, and then Via Grotta Azzurra, until you reach the steps leading you to the wooden rowboats. There is also a bus traveling between the famous cave and Anacapri’s Piazza della Pace.

3. Take “the Chair” to Monte Solaro

Another unforgettable adventure Anacapri offers its guests is the chairlift to the highest point of the Island, the top of Monte Solaro. The fabulous chair journey starts right in Piazza Vittoria and takes about 12 minutes to reach the most breathtaking spot on Capri Island. 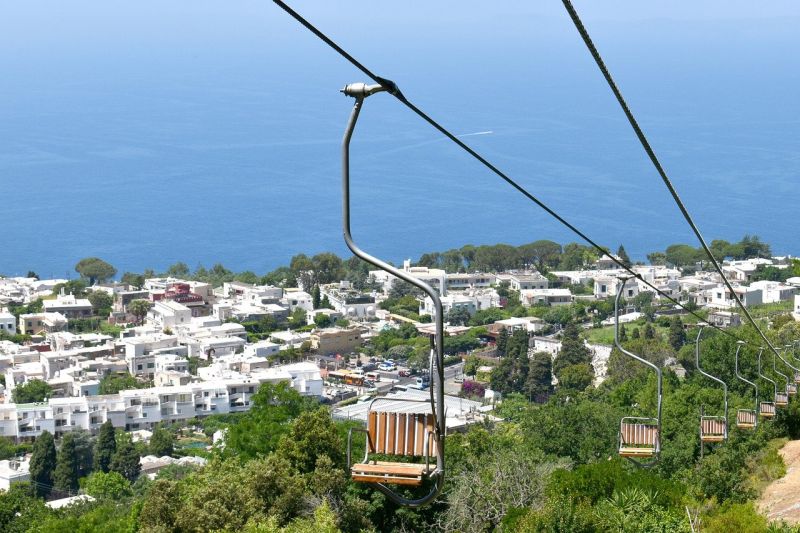 Rising 589 meters above the incredibly blue sea, Monte Solaro’s peak dazzles its visitors with amazing views of Capri Island, the nearby Gulfs, and the famous Faraglioni, the three giant rock formations rising out of the sea near the island’s coast.

The peak can also be reached on foot, following the well-marked trail starting from Piazza della Pace in Anacapri. Though the chairlift is an incredible experience in itself and shouldn’t be missed, you can always save it for the descend if you are looking to include a little hiking in your expedition.

4. Take a walk through the Philosophical Park

There is one other uplifting place near Anacapri, that fills its wanderer’s hearts with awe, provoking their minds and endowing them with an overwhelming desire to become their best self.

Capri Philosophical Park and nature reserve was built by Swedish Professor and Economist Gunnar Adler-Karlsson, first to preserve the wild magnificence of the Mediterranean flora, allowing it to grow spontaneously, and second to offer its visitors a chance to find peace and be inspired by the world’s greatest philosophers.

On the three thematic paths of the park, Idealism, Realism, and Wisdom, the visitors will find meaningful quotes from Western and Eastern philosophy, painted on tiles and nestled among the lovely wilderness and scenic views of the sea.

The Philosophical Park waits near the end of Via Migliera, a wonderful 2 kilometers long walkway, that starts at Piazza della Pace in Anacapri and offers its travelers a chance to discover the picturesque countryside, with its vineyards, vegetable gardens, fields, and ancient forests.

After spending some time exploring the park, you can follow the walkway to its end at the awe-inspiring Belvedere del Tuono.

5. Watch the sunset near the Punta Carena Lighthouse

About 20 minutes from Belvedere del Tuono, down the mountainside, lies the old medieval watchtower – Torre della Guardia – which used to protect the Southwestern coast of the island from its many invaders. Nestled near the entrance of the tower, a series of steps will take you on the road to Punta Carena bay and its famous majestic Lighthouse.

Active since 1867, the impressive Punta Carena Lighthouse is one of the oldest and the second brightest beacon in Italy.

The beautiful, quiet coast, with famous crystal clear waters, and the glorious “Faro” guarding it, is a favorite beach of the villagers. A perfect place to enjoy the sun and sea, Punta Carena offers a public area, as well as some awesome beach clubs, with lovely sundecks and steps leading down into the water.

Endless miles of blue sea, lovely fishing boats gliding over the water, and the dramatic Lighthouse in the background, make the sunset near this lovely bay truly unforgettable.

Also, on summer evenings, the enchanted wanderers can enjoy live music at some of Punta Carena’s local cafes.

If you wish to avoid the hike to, or back from the bay, you can always catch the bus going every 20 minutes between Anacapri’s center and “Il Faro”.

Taking an afternoon to just wander around the lovely lanes and piazzas in Anacapri is a must for any traveler looking for fairy-tale sights, authenticity, and blissful freedom.

The Historical Residence and Museum Casa Rossa and the famous Church of San Michele Arcangelo, with its impressive majolica floor depicting Adam and Eve’s exile from Eden, can also be found here, by following Anacapri’s main street, Via Giuseppe Orlandi.

The best place to get lost for a few hours in Anacapri is Quartiere Boffe, one of the oldest and loveliest neighborhoods, with its traditional whitewashed houses, narrow, winding streets, and charming little piazzas.

As you find yourself wandering around Italy, it’s impossible not to fall in love with the amazing food being offered everywhere with vibrant passion and pure joy.

And Capri Island is home to some world-renowned dishes, like its famous Insalata Caprese or traditional Ravioli Capresi, cooked with locally grown produce. So you are definitely in for a culinary treat! 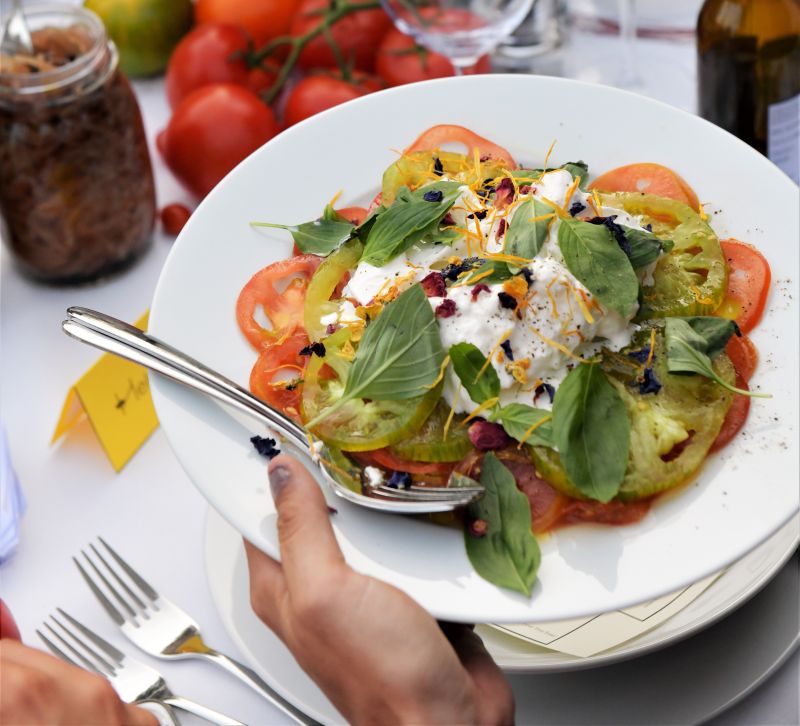 A great place to sample traditional dishes in Anacapri is the famous family-run restaurant “Da Gelsomina“. Using ingredients fresh from their garden, the enthusiastic chefs have been enchanting Anacapri’s locals’ and visitors’ taste buds for generations.

Among their most famous customers, we encounter the Swedish physician and writer Axel Munthe, who ate here often and mentioned Gelsomina’s mother in his memoirs.

Plus, the restaurant offers amazing views from its terrace and divine white wine from its own little vineyard.

Like many restaurants on the island, “Da Gelsomina” is closed for the winter season, from the middle of November until the middle of March.

Thank you, Dear Traveler, for wandering a while with me among the magnificent sites in Anacapri! I hope someday your journey will take you to this astonishing paradise, and amidst its brilliant light and breathtaking beauty, you will find joy, meaning, and inspiration to follow your dreams.

7 Unforgettable Things To Do in Delphi, Greece

Things You Will Love About New Zealand

Things to Do in Punta Cana for First Timers