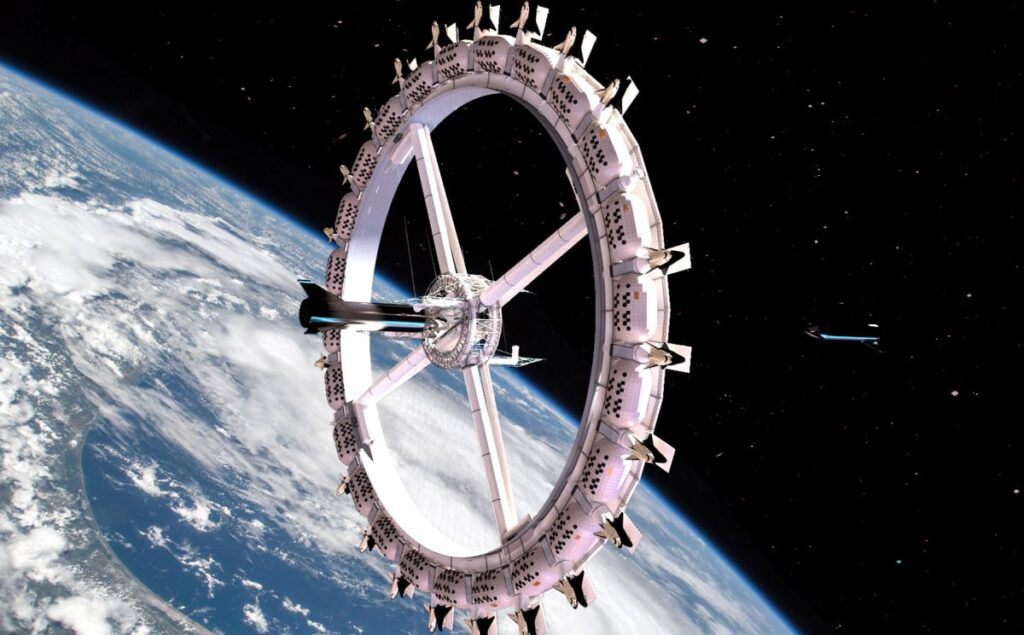 Spinning like a Ferris Wheel on Earth’s orbit, the first space hotel is no longer a vision for Sci-Fi writers. Orbital Assembly Corporation, a California space construction company announced the possible completion of a space hotel in 2027.

The hotel will be hosted by the new Voyager Space Station and is said to host rooms for 400 people, a cinema, restaurants and a spa in its 24 modules, each having 3 levels and a habitable surface of 500 square meters.

It looks like space tourism will be taking off much sooner than we have imagined. “We’re trying to make the public realize that this golden age of space travel is just around the corner. It’s coming. It’s coming fast,” said John Blincow, a former pilot in charge of the new project, in an interview for CNN Travel.

So what’s the atmosphere like on this edgy hotel? How ‘normal’ will it feel? Moreover, what will trigger the need to travel here, except for that innate human urge to constantly overcome our condition?

The team of architects in charge with the design of the hotel dream big. They say this is not your regular Stanley Kubrik’s Space Odyssey capsules, which feel ‘sterile’ in the movie, but more like vivid and vibrant living spaces, with lots of fun activities: “Because of the weightlessness and the reduced gravity, you’ll be able to jump higher, be able to lift things, be able to run in ways that you can’t on Earth,” designer Tim Alatorre stated. The accommodation offer will consist of both luxury and standard rooms, so you’re in for some serious out-of-this-world comfort. But activities such as sleeping and eating will be similar to the experience back home, located only about 450 kilometres away in a straight vertical line.

The Voyager Station, which will accommodate the first space hotel, will offer a total of 11,600 m2 (125,000 square feet) of habitable space in access tubes (‘traditional space hallways’) and living capsules. If you are a bit familiar with the shape and size of the International Space Station, here is a great scale comparison between the two.

A definite cost per person (or per night?) was not set yet, but there is speculation that a single space travel experience to this hotel could begin at $250 000. There is even talk about luxury space villas for sale, in case some want to linger on for more than just a few days.