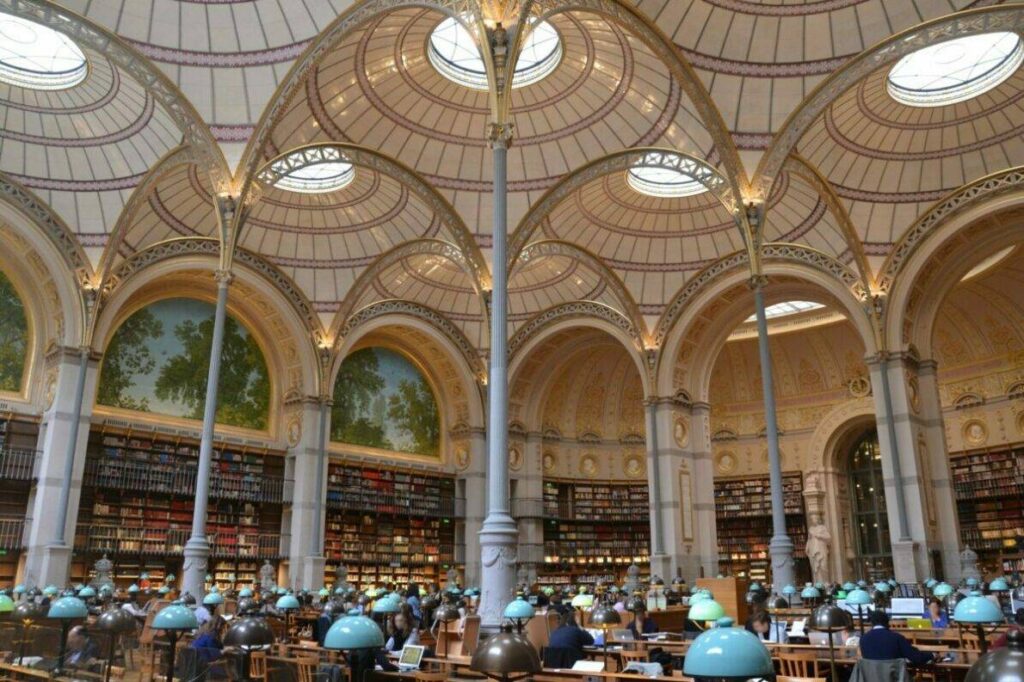 Yes, a good book can take you on fantastic journeys through different times and places. Imagine though finding or reading a good book in a venerable old library, one so impressive that almost seems mystical. Here is a list of  Europe’s beautiful libraries that will take your breath away from your very first step inside.

Trinity College Library, the largest library in Ireland, is well known especially for the impressive main chamber. It was built between 1712-1732 in the Georgian style and it measures not less than 213 ft (65 m). Over 200,000 books furnish the elegant tall wooden bookcases. The big collection possibly has something to do with the fact that the library owns the right to claim a free copy of every book published in Britain and Ireland.

Interesting fact – among the books, there’s also the famous Book of Kells. It was written by Celtic monks over 1200 years ago and being one of the most valuable manuscripts in existence.

The National Library of France opened to the public in its current location in 1868. At that time it registered the biggest collection of publications in the world because, as the Trinity College Library in Ireland, Bibliotheque Nationale De France holds copies of all French publications.

The most picturesque of its chambers, the Labrouste Reading Room was designed by architect Henri Labrouste, and it is considered until today a neoclassical masterpiece.  The dazzling white terra cotta domes and large windows that fill up the space with warm natural light, make the room’s towering ceilings seem to reach even higher than its five stories. As an architect known for combining the practical with the aesthetic, the most fascinating designs of Labrouste are invisible to the eye. One of them is the heating system beneath the wooden floor of the library while another is the huge system of pneumatic tubes designed to bring books to and from readers. You can imagine that both were considered massive innovations at the time they were built.

The Labrouste Reading Room was closed for 6 years due to renovations but luckily, it reopened its doors in 2017. If you are in Paris, don’t miss the chance to at least pass by and admire it shortly. It’s free of charge.

This sumptuous library was constructed in 1776 in the baroque style. It is holding the largest monastery library in the world and the ceiling is decorated with paintings depicting the stages of human knowledge before the Divine Revelation. The whole design reveals the values and ideals of the Enlightenment.

As a bonus, the library is kept lovingly in the shelter of the impetuous mountains of the Gesäuse National Park. So, your way towards it will be as dazzling and satisfying as seeing the library itself.

This UNESCO World Heritage Site is just a stone’s throw away from Portugal’s capital, Lisbon. The fine Roccoco-style Library is occupying the largest and most prestigious room in the Palace of Mafra. The 280 ft (85 m) long chamber built in the form of a cross is paved with a multicolored limestone floor and Rocaille shelves. It is also one of the most significant Enlightenment Libraries in Europe, gathering around 36,000 volumes dating from the 14th to the 19th centuries.

Of course, you can imagine that book-eating insects pose a great threat to the old tomes… Or don’t they? Well, an interesting fact, the administration found a very creative solution to this problem – bats.  During the day they hide in the generous shadows of the surrounding garden or behind the extravagantly carved bookshelves, while during the night they patrol the library in search of the evil but tasty pests. Strange? Maybe. But you might be surprised to find out it’s not the only library in Portugal which adopted the same tactic.

Sadly visitors are permitted to see the Klementinum National Library only from a viewing corner, but it’s so magnificent that we had to add it on our list. You can find this mesmerizing baroque library in the historic area Klementium in Prague, one of the largest building complexes in Europe.

The library was opened in 1722 as part of the Jesuit university and has remained intact since the 18th century. You can admire Jan Hiebl’s ceiling frescoes and the collection of astronomical clocks and geographical globes dating ever since. Also worth mentioning is the fact that among the 20,000 books the library shelters, some historical books are being digitized and will be soon available on Google Books.

These were our top picks of Europe’s beautiful and impressive libraries. Anyhow, there are many others out there patiently waiting for their visitors.
What libraries would you add up on the list? Let us know in a comment.

As a tip: until your next trip, you can still wonder a little more with your mind. Many libraries provide on their websites virtual libraries or even free virtual tours. If you are a curious one, eager to bring your help to the global knowledge-base and maybe looking for a satisfying activity during the pandemic,  we have a proposal for you. Many libraries accept (and need) volunteer help from home for digitizing their archives. So, if you are into that, take the opportunity! Many people and researchers around the world will be grateful to have access to them, and you might discover juicy stories and studies on topics that interest you.