Guayaquil is one of the essential stops when visiting Ecuador, a city filled with color and contrasts.  With a history of more than 475 years, it is the second largest in the country, after Quito, its capital. Guayaquil is mainly visited for having the only airport with flights to the Galapagos Islands, but it has much more to show tourists and locals.

Set between the Pacific Ocean and the Guayas River, this modern city has become an important port, blending nature with the ancient and the modern.

Although there are several travel alerts when it comes to visiting Guayaquil, where you should exercise extreme caution and not travel off the beaten track, the city is quite picturesque and worth a visit if you are on the lookout for authentic and meaningful traveling experiences.

Here are some of the city’s highlights:

Officially called the Malecon 2000, this fully integrated park has become an important urban space in Guayaquil. It has existed since before 1820 when it was just a riverside promenade, but now it has become a space with restaurants, shops, markets, an amusement park, event areas, and important monuments. Close to the best hotels in Guayaquil, Ecuador, the Malecon is full of life day and night.

At the end of its two and a half kilometers (1.5 miles), you will find the esplanade of the MAAC Museum (Anthropological and Contemporary Art Museum). The permanent exhibition shows the history of more than 10 thousand years of Ecuador, with more than 50,000 archaeological pieces and artifacts. You may also find temporary exhibitions of anthropology and modern art, with more than 3,000 pieces of art from Ecuador and Latin America. Even if you don’t enjoy modern art or anthropology, it’s worth the visit for the views of the Ferris wheel of the Malecon and the city.

Guayaquil is full of urban parks, including the Malecon, none, however, like Santay Island. In this space of more than 2,000 hectares live about 200 people, who are the main guides of the island. The main attraction are the mangroves, of which there are more than seven species. In addition, the island is home to anteaters, iguanas, bats, boas, ocelots, and raccoons, among other species of mammals and reptiles.

Seminario Park is one of the most important parks in Guayaquil, and one of the most curious parks in the world. Facing the cathedral of Guayaquil, this park is better known as the Park of the Iguanas, since it houses more than 350 iguanas in the park alone, as they are also found throughout the city. It’s suggested to make it an activity during your visit to look for them wherever you go. These animals are not dangerous, so you can get close, although it’s not recommended to touch them, and definitely not to feed them. 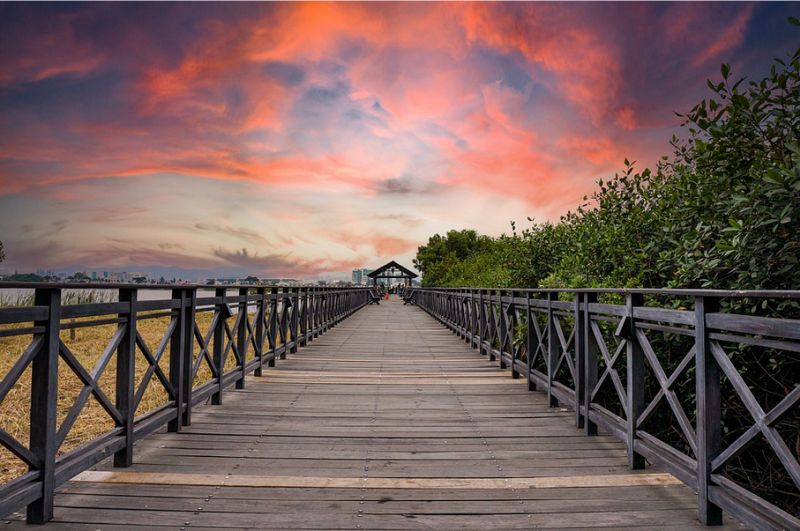 A lighthouse, a chapel, and a museum. Although these are not three elements that are often found together, it’s only part of what can be found on Santa Ana Hill. After climbing 444 steps, filled with restaurants, cafes, art galleries, and artisan crafts, you reach the top of Santa Ana Hill where you’ll find the Naval Museum, the Chapel of the Virgin of Mercy, and an 18-meter (60-foot) lighthouse.

This hill is seen from the Malecon, where the tip of the lighthouse stands out from its triangular shape and colorful buildings. However, the main attraction to climbing to the top of the hill is the 360º view of the city

On the slopes of the Santa Ana Hill lies the neighborhood of Las Peñas. It’s thought that this neighborhood is where the city was founded, which is mainly why it’s full of colonial buildings. Around the year 2000, this area was renovated along with the Santa Ana Hill, to give it a more colonial look. It’s precisely the architecture and the growth of art galleries in the area that is most attractive to the visit. 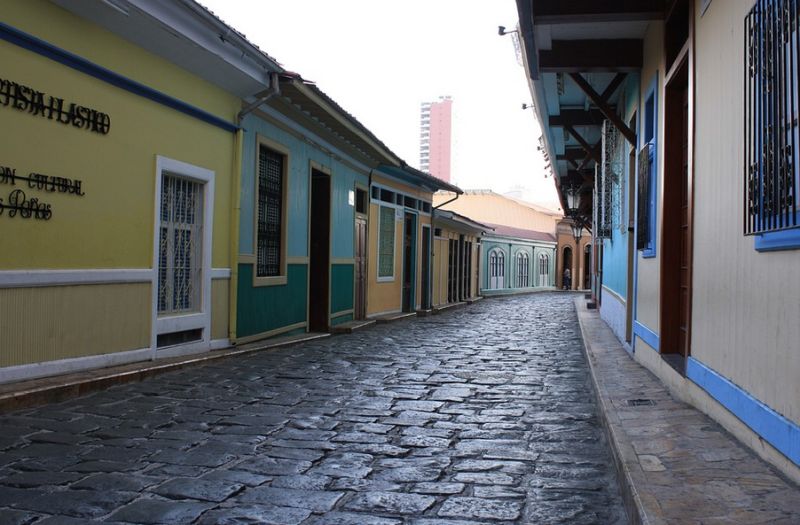 After being home to fishermen, artisans, and even wealthy landowners, today it’s considered Ecuador’s cultural heritage for its extensive history and colorful houses, most of them over a hundred years old. Many historical figures have lived in this neighborhood, from former presidents of Ecuador to writers and painters. Some of them were Ernest Hemingway, Pablo Neruda, and even Che Guevara and Antonio Neumane, the composer of Ecuador’s national anthem.

5.  Vibrant Markets Where You can Taste Something New

To take a break from climbing the hill, the next stop should be a market to try the best dishes of the Ecuadorian coast. One option is the Mercado Sauces 9, famous for having the best Guayaquil ceviches.

On the other hand, on the Malecon is the Mercado del Rio. Equally famous but in a very different way. In Mercado Sauces 9 you can find more street food, while Mercado del Rio is a gourmet market. In both you can appreciate the most important dishes of Guayaquil: encebollado (broth made mainly of fish), bolon de verde (green banana ball mixed with cheese and pork rinds), crabs (made with the traditional Guayaquil recipe), and ceviches of various types.

Food in Ecuador is diverse, just as the country itself. Situated on the coast, Guyaquil has plenty of seafood specialties, but you should also try out the country’s amazing fruit – passionfruit, pitaya (dragon fruit), tree tomato- as well as their delicious traditional soups.