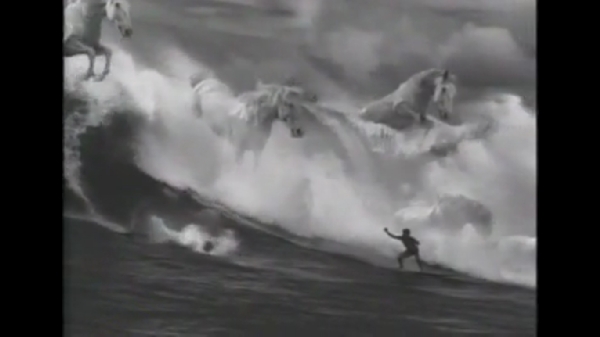 The cornerstone of the campaign is a television commercial, originally 60 seconds long, which centred around a Polynesian surfer successfully taking on a gigantic wave. Shot in Hawaii over a nine-day period and directed by Jonathan Glazer, the piece went on to win more awards than any other commercial in 1999.

The plot centers around a group of surfers, waiting for the perfect wave. As it arrives, the crashing ‘white horses’ turn into actual horses. One by one, a surfer ‘crashes out’, leaving only one, who manages to conquer the wave. The others join him as they celebrate on the shore.

The advert was inspired by Walter Crane’s 1893 painting “Neptune’s Horses”. The text also draws inspiration from Herman Melville’s novel Moby Dick, including the line “Ahab says, ‘I don’t care who you are, here’s to your dream.'” (which does not actually appear in the novel).– information from Wikipedia