Today we want to share with our fellow travelers six charming villages in the Netherlands which you can explore by boat. Built centuries ago around small harbors, these villages unveil a rich history and Dutch traditional architecture.

Discovering their narrow streets or cycling along the banks of the small canals make for some memorable traveling experiences. Enjoy reading this and feel free to gather inspiration for a countryside escape this year! 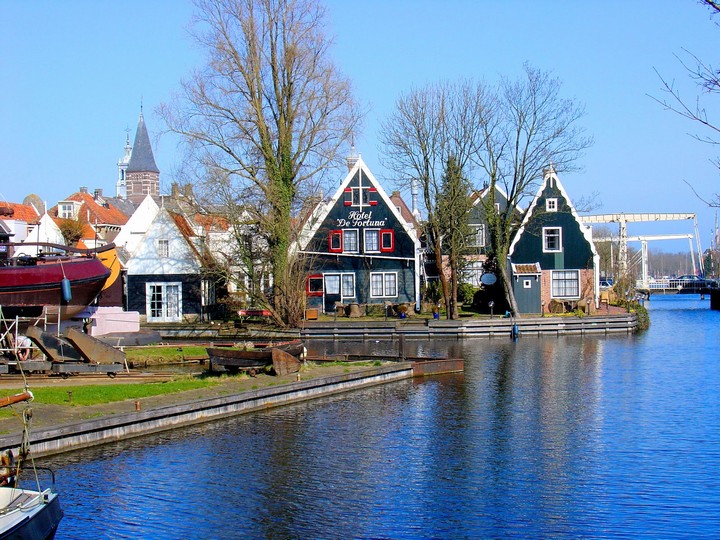 Situated at only 30 minutes by bus from Amsterdam, Edam is one of the best places to visit outside the capital. Its monumental houses, warehouses, churches and bridges hide a half millennium of rich history.

During the 17th century, this small settlement became famous all over the world because the Dutch sailors were trading wheels of Edam cheese for spices and other riches from the far East. The region was also known for its industry, shipyards and ports.

Today, the village of Edam is visited for the Cheese Market and its picturesque canal, making it an irresistible destinations for food enthusiasts and amateur sailors.

Try to plan your stay so that you can visit the Cheese Market which is held every Wednesday. Even if it might be very crowded, tasting traditional cheese will make it worth your while. Best time to visit Edam is between July and August, the period when farmers bring their products by old boats and horses, as their ancestors did centuries in a row. 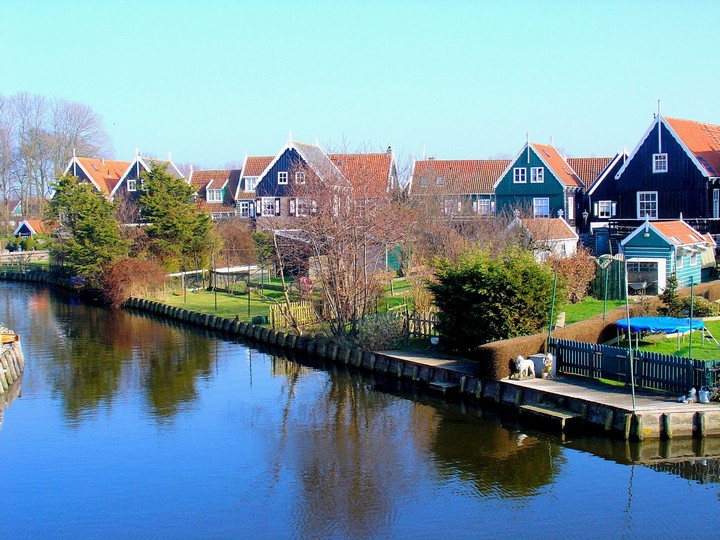 Seen as one of the last relics of the traditional Dutch culture, Marken is now facing an amazing revival as it opens up to the world. For many centuries, the inhabitants of Marken had to live apart from the mainland. Things changed in 1957, when a causeway was built to connect the village with the continent.

Formerly an island in the Zuiderzee (a bay in the North Sea) and now part of a peninsula, Marken hosts a charming small fishing village that will introduce you into a remote and fascinating culture.

What makes this fishing village special are the dark colored traditional houses built on stilts and on mounds. Keep an eye out for beautiful traditional costumes; the locals sometimes wear them during important events. To get more into the story of the village, you should visit Marken’s museum that exhibits mainly fishing heritage. 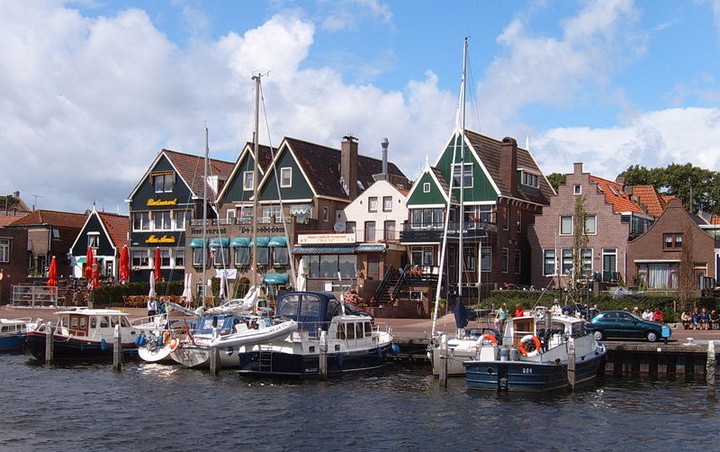 With over one millennium of history, Urk is a charming old port with a tranquil atmosphere. Being positioned in a vantage point on the shore of the North Sea, Urk’s economy was always based on fishing; today you can still witness this lifestyle in the harbor. 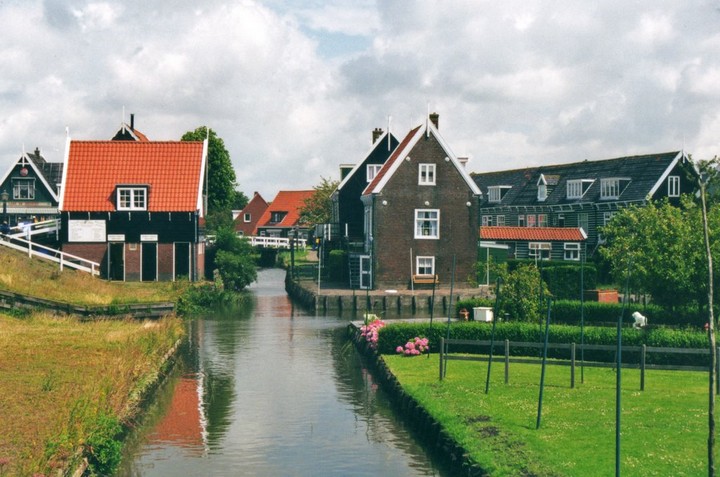 Its old part is perfect for walking and enjoying the fishermens’ houses, exploring the canals by boat or just relaxing on one of the many terraces that neighbor the harbor. You can try delicious fish dishes in the local restaurants. Keep in mind that most inhabitants consider Sunday a day of rest, so it’s best to visit Urk on weekdays or on a Saturday. There is also a nice beach, perfect to visit during summer. 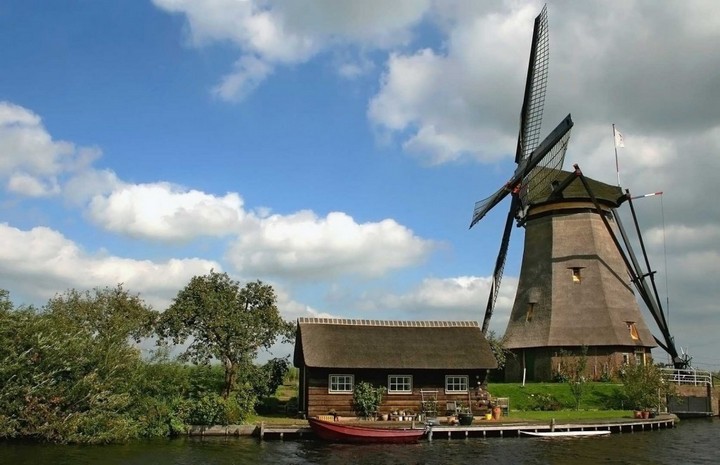 Around 1740, 19 beautiful windmills were built along the large canals (called “weteringen”) as an alternative way to keep the polders dry. The village of Kinderdijk is undoubtedly one of Holland’s most renowned landmarks and an authentic sample for the country’s rural life. The fastest way to get here is by motorway if you are coming from Rotterdam, following A16 in the direction to Dordrecht.

You can also take the Waterbus ferry from Rotterdam (the station is under the Erasmus bridge) or from Dordrecht (on Merwekade). Search for Route 20 and get off at Ridderkerk (De Schans), where you have to transfer to a smaller ferry to Kinderdijk.

Today the village — classified as an UNESCO World Heritage Site twenty years ago— is a popular tourist destination for its large network of windmills (the largest in Holland).  One of the windmills called Museummolen can be explored inside and the tour is usually combined with the steam-powered pumping station Wisboomgemaal. The ticket costs 6 euros.

Try to explore Kinderdijk by bike, because there are great (free) routes along the windmills. You can start your cycling tour from Rotterdam. 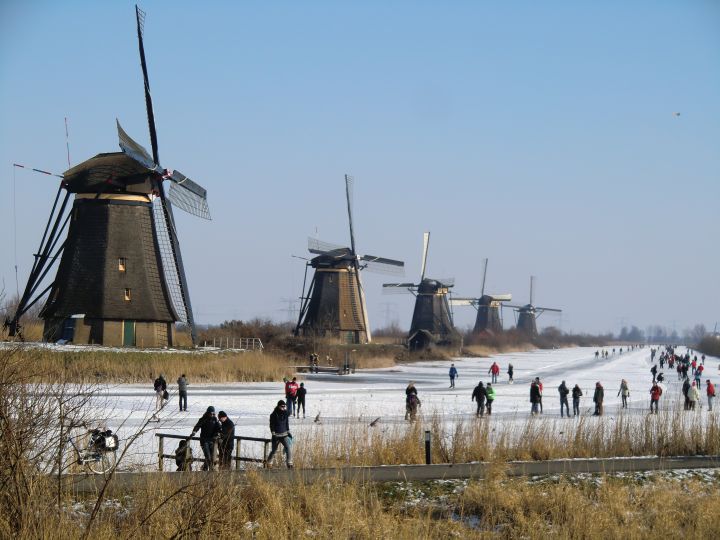 The place is also popular during the winter season, when the waters turn into huge skating surfaces. Sometimes it gets very crowded, as people are coming from all over the country to enjoy the scenery while sliding between the mills. 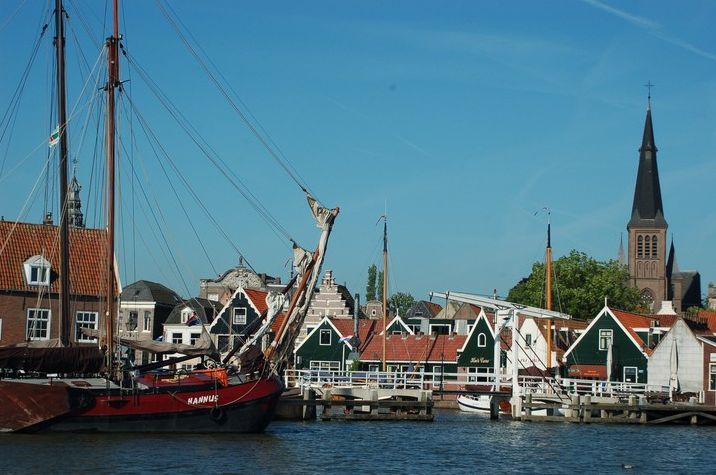 Monnickendam is a settlement in the Waterland and Zaan Region in the province of North Holland, the Netherlands. It is a typical Dutch harbor located on the shore of Lake IJssel and is popular for day trips from Amsterdam.

The historical centre of Monnickendam is well-preserved, with 74 buildings dating between 16th and 18th century, listed as National Monuments.

The Waterland region is a wonderland for bikers, so a ride there is highly recommended. The system of Fietsknooppunten (Biking nodes) allows you to orientate very easy, with numbered markers directing you from node to node.

During the summer (on every Friday), there is a 90 minutes free guided city walk. For a group of 6 persons or more, the fee will be 3€ per person and the tour can be in English, German, French or Italian. 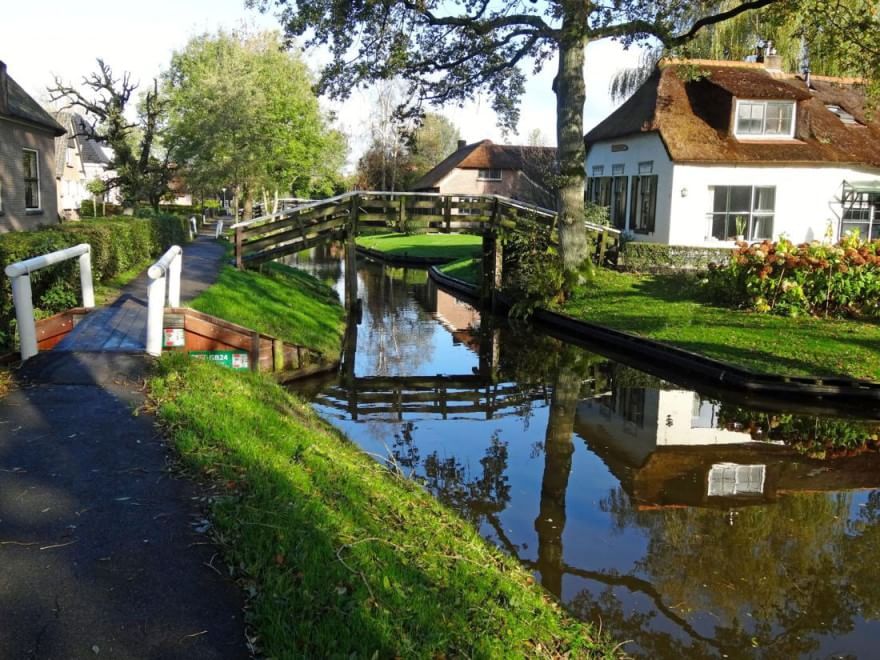 What we like most about Giethoorn is that there are no cars or roads here; tourists leave them out of the village and have to travel by water or on foot over the lovely wooden bridges. We covered a special post on Giethoorn a while back.

This “list” was gathered for inspiration purposes. It is not a “top”; each village has its unique features and each experience is unique. If you traveled in any of them, or if you know other beautiful villages in the Netherlands for the wandering traveler , please leave a comment below; we would be happy to get in touch and add them to the post. Happy summer ahead !